As the Greek philosopher, Heraclitus said, “There is nothing permanent except change,” which holds true for the automobile industry. Year after year, we constantly hear about the latest advancements in automotive technology.

From self-driving cars to voice command, various automotive technologies that were only imaginable in science fiction films have been developed and are currently being developed as you are reading this. It would be possible to manufacture the Knight Industries Three Thousand (KITT) car from the Knight Rider TV show and driverless taxis from Minority Report with the current technologies.

Who knows how long it will take before we see Back to the Future’s DMC DeLorean become a reality? What we’re sure of is that the development of automotive technologies has been moving leaps and bounds over the last decade. If you want to learn more about these developments, continue reading this article.

What Is Automotive Technology?

Automotive technology refers to the study of self-propelled vehicles or machines, including automobiles, marine vehicles, and other motor vehicles. It deals with things like engine construction, fuel, ignition systems, and power trains.

It also focuses on developments in brakes, transmissions, as well as electronic and diagnostic equipment. In a sense, anything that makes your life easier and safer while driving your car is thanks to advancements in automotive technology.

How New Technologies Are Affecting The Automobile Industry

The automobile industry is considered one of the most receptive industries when it comes to adopting and integrating new technologies. Manufacturers have been competing not only based on the car’s performance, durability, and reliability, they also have been slugging it out in the areas of comfort and user-friendliness.

This is not surprising as cars are usually treated as an extension of a person’s home. This led to integrating user-focused technologies into automobiles, such as Bluetooth connectivity, voice command, and infotainment systems.

The Rise Of Autonomous Technology

No, this is not a Terminator movie. Autonomous technology in the automotive industry has been expanding in the past years as more car companies develop their own self-driving vehicles. 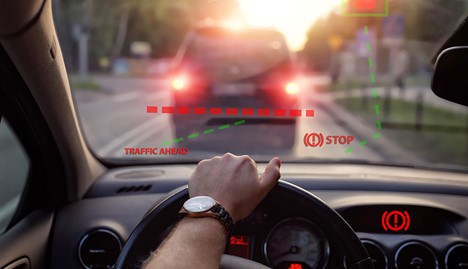 Automatic Emergency Braking (AEB) systems are now present in most modern cars. During emergencies, your reaction as a driver can be flawed, and that’s what AEB is looking to solve. Most accidents occur due to front-to-rear crashes, and with this tech able to detect an object in front of the car, instant brakes will be applied.

This technology uses radar, cameras, and lidar technology to assess the road ahead and work out potential collisions. AEB systems inform drivers what they need to do to prevent a crash, and if they take no action, it will automatically apply the brakes on their behalf.

With this tech, the accidents are expected to reduce by at least 50%. This means that lives will likely be saved, and several injuries will also be avoided.

Another autonomous technology advancement is the road-user interpretive software featured in the Google Car, which can interpret the common behavior of other drivers you encounter on the road. The system uses shape and motion descriptors that enable the car’s CPU to respond to the movements of other vehicles.

By using this software, the car’s computer can determine whether the surrounding road users are bicycles, motorcycles, or cars based on speed and movement patterns using laser sensors.

You simply can’t talk about advancements in automotive technology without mentioning self-driving or autonomous cars. These cars utilize multiple technologies, such as cameras, sensors, EPS motor, laser scanners, brake actuators, and software to process all data types, from the amount of traffic on the road to speed limits. 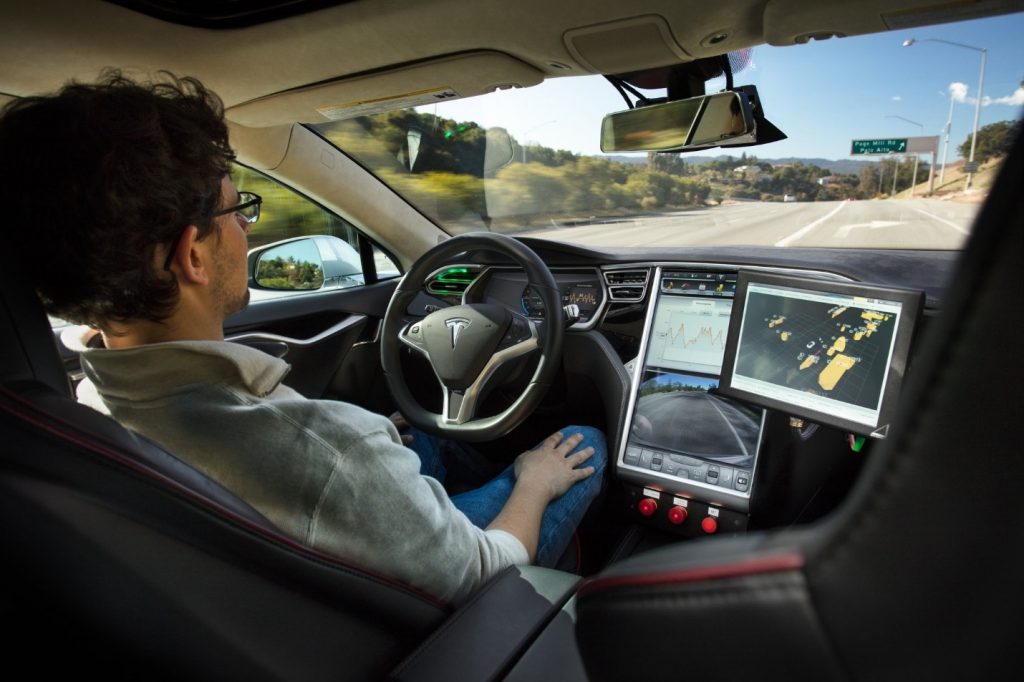 While there are opposing opinions regarding self-driving cars, it’s undeniable that more car manufacturers are buying into the idea and are trying to develop their own concept. Tesla has been testing for years its Autopilot mode and remained undeterred despite a fatal accident.

Besides personal use cars, companies have also been developing self-driving systems for exclusive-use cars, rideshare automobiles, and fleet trucks. Ridesharing service provider Uber is betting on self-driving vehicles to be its future.

Other Autonomous Technologies In Automobiles

While self-driving cars might be the pinnacle of autonomous technology, there are other more standard features that are already implementing the technology, including the aforementioned AEB, adaptive cruise control, lane sensors, and self-parking capabilities.

Audi has developed an adaptive cruise control that utilizes 30 control units to analyze the vehicle’s surrounding environment to regulate the car’s speed relative to its distance from the vehicle ahead. While not wholly autonomous, this technology would help avoid accidents when drivers get distracted or take their attention off the road.

Meanwhile, some BMW models can now park themselves without driver intervention. To parallel park, you only need to drive past a preferred parking area, and the system will notify you if it found a space where your car can fit, and it will do the rest.

Predictive Automobile Technology And Its Wide Range Of Applications 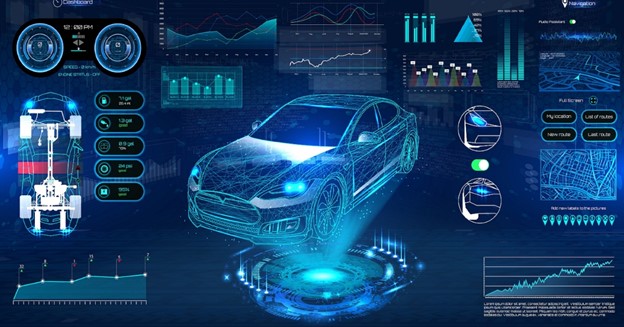 These technologies may be used for predictive analysis that may lead to connected cars as the Internet of Things (IoT) becomes more popular in the industry. The possibility of IoT vehicle-to-vehicle communication increases through this.

ML and IoT data techniques may also be applied to create predictive maintenance analytics applications that can precisely and accurately determine whenever vehicle maintenance is needed.

You may have heard or maybe even own an Amazon Alexa, a Google Nest, or any other smart home integration technology. Over the years, their use has become more and more popular as more people want to control their home gadgets and appliances on a single app. 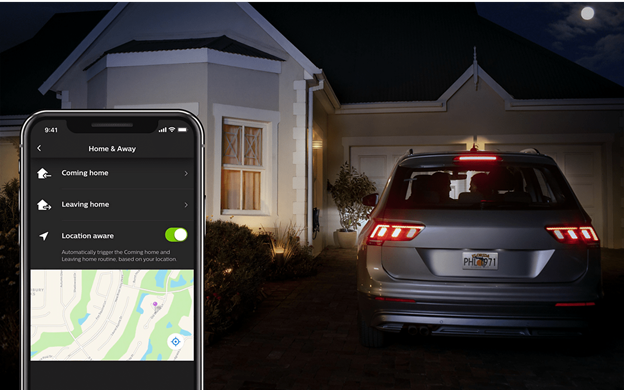 This is why automakers are integrating smart home technology into automobiles to make their lives easier. Successful integration would mean drivers will be able to treat their cars as smart home devices and ask them to perform functions, such as opening garage doors and turning on the lights using voice command.

In 2017, Ford worked with Amazon to use Alexa in its automobiles. Ford developed the SYNC3 infotainment system, capable of accessing devices covered by Alexa, including carport doors, home lighting, and any other gadget connected to a home’s PC network.

The Influence Of User Interactivity On Automotive Technology

As demonstrated by integrating smart home technology into automobiles, user-interactivity plays a big part in car manufacturers’ development of automotive technologies. As the use of onboard computers in automobiles becomes more of the norm than in previous years, the capability to cater to user interactivity becomes more important.

Finding smart dashboards that enable people to answer calls, read messages, play music, conduct GPS navigation, and deploy onboard diagnostics is not as exceptional as before. Even entry-level cars now have these types of dashboards.

Ever find yourself carrying a load of grocery bags in both hands and struggling to get the key to unlock the car and open the trunk? The development of automatic liftgates would make sure that you won’t need to experience this again.

This technology allows you to just walk near your car with the key fob in your possession, and the car will automatically open itself for you.

Meanwhile, biometric seat technology can help drivers manage ordinary driving disturbances to make the experience more comfortable and secure. Using information from the driver’s face and palm and combining it with data from the car’s steering wheel, accelerator, clutch, and throttle, this technology can identify the driver’s anxiety and gives instructions on when to take a break from driving.

While not as sophisticated as the other entries in this article, not all cars, especially entry-level ones, have a backup camera already installed upon purchase.

Backup sensors are very useful, but having a backup camera could make a huge difference, particularly when reversing into tight spaces and seeing obstacles that might go undetected by the sensors, such as small items, animals, and children.

Technological advancements are not going to stop any time soon, so automakers are trying to keep up with them to stay relevant and remain competitive. The role of technology in people’s lives has dramatically increased over the years, and the same could be said about automobiles.

The important thing is that these technological innovations are targeted towards making us more comfortable and keeping us safe while we travel from point A to point B. Technology is a gift as long as we learn to use them properly.

Learn About the Capital One Mobile Banking App